Oh what a difference a night can make…

I woke up at 4:30, to my natural alarm triggered by all the water I’d taken in the previous evening.  For some reason I have been waking up at 4:30 am every morning for the same reason, though on this fine morning, the call of the alarm was far more insistent.

It was not the worst situation, however, despite the cold on the hilltop where I camped.  The milky way stretched above my campsite in an amazing display, with only a little light pollution from distant Borrego Springs to interfere with its brilliance.  One of my favorite parts of hiking and sleeping outside has historically been taking photos of the night sky, and to this point, I’d been far too tired or sore or both to do so.  I propped my camera up on my boot and angled it toward the barren hills I’d passed through the previous day, and took one of my better Milky Way exposures.  Happy that I’d taken the opportunity to indulge myself, I curled back up into the warmth of my sleeping bag and went back to sleep. 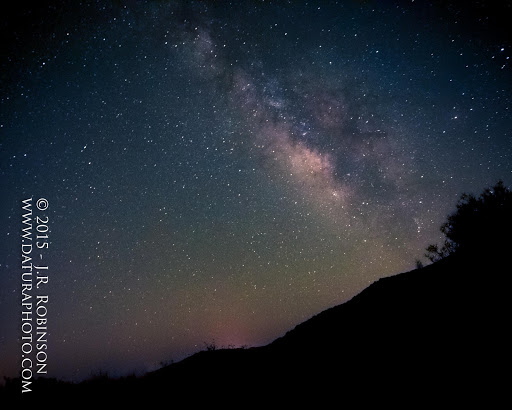 I rose at 7, and quickly attempted to break camp.  Already the hikers I’d passed at the water cache were starting to make their way up the trail toward where I camped, and my rampant sense of inferiority at not being able to get an early start was starting to rise.

I waved to Erik and his son Ryan, two of the Warrior Hikes group I’d reconnected with, and finished packing by 7:45, feeling mildly triumphant to be out before 8 for once.  Immediately it seemed I was in a different place entirely from the day before.  Where I had been surrounded by hot brown sand and the skeletal remains of burned bushes and cacti just a few miles back, now I walked through comparatively lush greenery, junipers and thick chaparral that hemmed in the relatively flat trail on both sides.

A few miles up the trail I met Sarah, and her little dog Tofu, who was making a valiant effort up the trail despite the heat.  They were taking their time, resting when Tofu got overheated and drinking water as they could.  I was impressed they’d made it through the heat of the previous day, but the breeze was blowing cool that morning, and they had an easier downhill push ahead of them.  I wished them luck and continued on my way.

Around a few bends I caught up with a pair of Warrior Hikers, Tony, Erik, and Ryan.  Tony had caught a snake, a gray constrictor that I couldn’t immediately identify (to my shame), but later discovered was a Coastal Rosy Boa, thanks to the internet.  He returned it to a bush before I could get a good picture of it, but it was free to go on, and so did we all.

Further on down the trail, I officially had the chance to meet Mama Goose, the de facto ringleader of the Warrior Hikes group, and a lovely woman.  A former Air Force combat medic, and a veteran hiker of the Appalachian Trail, Mama Goose had an infectious spirit toward the trail, and I found my steps accelerated just being in her presence and chatting with her.  She reminded me of a medic friend I’d had at my previous job on Jane the Virgin, and was a pleasure to talk to.  She was also the first person I’d met on the trail who knew what my job was when I talked to her, having worked as a background performer on the upcoming adaptation of A Walk in the Woods, an unexpected but pleasant surprise. 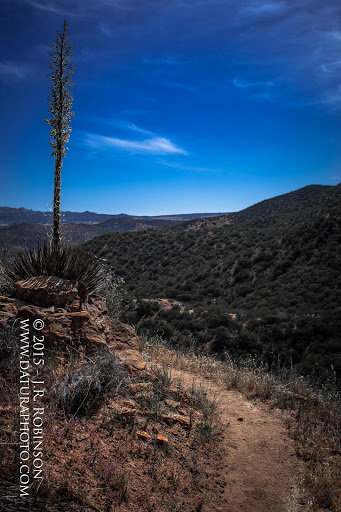 It was late morning when we all found ourselves stopping, sharing in a moment as we stepped across the 100 mile mark.  We took pictures of ourselves with the stone mile marker some hiker had arranged, and generally felt good about the experience.  For me, it was oddly and quite unexpectedly emotional.  For someone who had been ready to quit at mile 32, the experience of having walked 100 miles was powerful, thrilling and uplifting, and I tried not to hear the others as they joked that we only had 2500+ more to go.  It was not a time for dreading what was to come, but for being happy in the place where I was.

More than anything, that was the mindset that had helped me push forward after my initial breakdown.  Looking back on the way I was thinking those first few days, all of my mental energy was put toward trying to figure out how I was going to go six months and 2663 miles when I was struggling so mightily in the first few days.  I first stepped foot onto the trail with grand goals and big dreams, and even bigger worries, but all about the future.  How was I going to tell the story of my through hike?  What would I do after the trail?  Where would I live?  Would my relationships survive, be they friendly or romantic?  What if I failed, would those who supported me to this point look down upon me for not finishing what I’d talked so much about doing?  Who was I going to be when the trail was complete?

I let the future dictate my emotions and mental state those first few days, but after Mt. Laguna, with some much appreciated help from No-Trace and Unbreakable, I started to think of each day as an encapsulated journey in and of itself.  Leaving my camp site on the cliff surrounded by falcons, my goal was not to get to Canada, or to the Sierras, or to Big Bear or Idyllwild or even to Warner Springs, my next resupply.  My goal was to hike until I stopped, to put myself in position to get to Warner Springs on time, yes, but not to worry about the end goal.  The experience became its own goal, its own reward.

There, looking down at the stone 100 alongside the trail, I absorbed the experience, looking back on the week before, and ahead, but not too far, to the miles to come.  It was a powerful experience, one of the most powerful I’ve had on the trail, and one not to be forgotten soon.

I continued down, knowing I had 9 miles to go that day, but happy in my energy levels and in the approaching terrain.  Three miles of downhill slope lay ahead of me, and after that 6 more across Warner Meadows, which I’d been told were quite lovely, and I had been looking forward to for days.

I stopped at Barrel Springs for lunch, and ate in the shadow of a large oak.  The heat of the day was creeping up, and part of me wanted to lay there in the shade and let the sun pass on, but after an hour or so I roused myself and pushed on.  In Warner Springs there was promise of showers and food, and a welcome resupply that would bring with it a new solar charger (something I was in desperate need of, as my phone and camera were on their last few bars of energy).

The afternoon sun played golden on the sweeping meadows I found myself walking through a few miles later.  Vast expanses of grassland, grazing territory for local cattle farmers, were dotted with gnarled oaks and patches of datura plants, sadly not flowering, but exciting nonetheless.  I’d seen my favorite flower on the way north from Mexico, but to see it in such abundance, and dotting the otherwise golden landscape with little patches of green, made the place that much more special.

I made good time, though I stopped often for the many photo opportunities the meadows provided, and reached the Eagle Rock formation around 5.  There I ran into Rick from southern Washington, and Bat, a hiker I’d not met but who immediately found it amusing to try and make a trail name stick to me.  Earlier, at Barrel Springs, Rick had referred to me as Film Star, since I as trying to make a movie about the trail.  Bat, named for his poor vision, apparently had trouble hearing as well and thought Rick said Porn Star.  I played along, able to roll with the punches, but secretly hoping the name would not take root.  Again at Eagle Rock they tossed the name around, and I did my best to ignore them.

Bill and Jennifer showed up, and I told Jennifer about datura flowers and their significance to me.  There was a flowering datura on the back side of the eagle-shaped rock, and I told her how the plant was beautiful, but very dangerous, hallucinogenic but not in the fun kind of way.  Native americans had long used it for vision quests and tests of manhood, but the side effects were not only unpredictable, but potentially permanent.  I’d long loved the flower, from the first time I encountered it in Zion National Park, in Utah, and had even named my photography business, www.daturaphoto.com, after it, thinking the name lent itself to the idea of capturing interesting visual representations of the world around me. 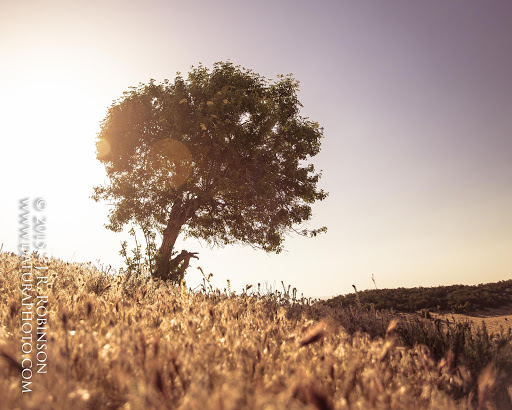 I took a few pictures of the rock and continued on, as the sun began to sit low on the western horizon.  A mile or so after the rock, the trail dipped into a majestic oak-lined creek bed, the flowing water and birdsongs carrying me foreword down the last mile or two to Warner Springs.  I heard turkeys in the trees and ravens cawing from weathered logs.  I saw a jackrabbit hiding under a bush from a hawk that circled above.  The light of the setting sun filtered through the twisted oak branches and cast deep shadows on the trail, and I delighted in all the beauty around me. 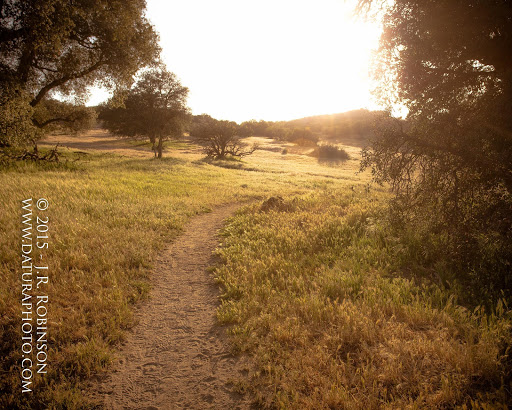 I got to the Warner Springs Community Center around 7:00pm, my feet and legs sore, but my heart full.  I met Stacey there, and we had a long talk as the sky grew dark, and were soon joined by Bat, who proved to be a lovely man, full of stories of his own experiences, and profoundly insightful about the things he loved about through-hiking.  To him, it wasn’t the prettiness along the trail, or the physicality of the hike, but the people you met along the way, and the experiences you had, either shared or alone, that would have a profound effect on the person you would become once it was all done.

For the first time on the trail, I had started to understand what he meant.  I went to sleep in my tent long after everyone else around the Community Center had turned in, and thought that this day had been the best day I’d had to this point.

This is a text widget, which allows you to add text or HTML to your sidebar. You can use them to display text, links, images, HTML, or a combination of these. Edit them in the Widget section of the Customizer.
<span>%d</span> bloggers like this: